How can we derive even greater benefit by combining what humans do best with the advantages of autonomous technologies? What should an adaptive autonomous picking system be able to handle and what safety measures are necessary to operate vehicles autonomously in public spaces? Answers to these questions are being provided by the QBIIK research project, which ends in June this year after three and a half years of development work.

The QBIIK project is funded by the Federal Ministry for Economic Affairs and Energy as part of the ‘PAiCE – Digital Technologies for The Private Sector’ technology program (see pullout). The program uses prototype solutions in specific application areas to highlight the opportunities that arise from integrating and using innovative digital technologies. “The various objectives include optimizing the use of resources and ensuring that production is as environmentally friendly as possible. The new QBIIK FTF robot system makes value-added processes more efficient while using fewer resources,” says Gerd Hembach of the German Aerospace Center, which is responsible for the project.

The project is developing an adaptive autonomous picking system that combines the advantages of autonomous technologies with human capabilities. At the heart of the system is a locally controlled truck with a gripper robot capable of moving euro containers with a maximum weight of 15 kilograms. The vehicle can position itself within the warehouse, navigate to its destination, and reach for the ordered goods – all completely autonomously. A human-machine interface can be used to request remote human support via a virtual reality user interface as necessary, for example, if a gripping process fails. In this scenario, a person takes control of the robot to complete the identification and gripping processes. This human intervention allows the robot system to learn how to handle new work processes so that it can carry out new procedures in the future. 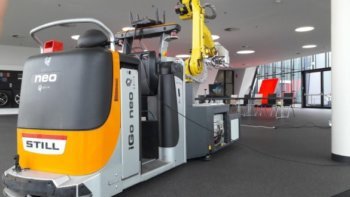 Through the PAiCE (Platforms/ Additive Manufacturing/ Imaging/ Communication/ Engineering) technology program, the Federal Ministry for Economic Affairs and Energy (BMWi) funds the testing of new digital technologies in industrial processes and applications. The QBIIK project is part of this funding program, in which the development partners BÄR Automation, STILL GmbH, Audi Sport GmbH, and the Karlsruhe Institute of Technology (KIT) are participating. The project is scheduled to end in June 2020 after three and a half years.

The iGo neo has all the right ingredients

The iGo neo from industrial truck manufacturer STILL provides the vehicle platform for the QBIIK project. The engineers at STILL incorporated intelligent robot technology – and therefore cognitive abilities – during the picking truck’s development. The result is an autonomous system that is perfectly tailored to the requirements of order picking tasks in environments such as retail, e-commerce, and spare part sales. “The truck’s equipment has proven hugely beneficial in this project. We have retained more than 90 percent of the existing software frameworks in the iGo neo and only had to make minor adjustments,” says Bengt Abel, who is responsible for the QBIIK project at STILL and at the holding company, the KION Group. “Because the vehicle is so autonomous and we know it very well, we have had more time to deal with other tasks.”

And there have been plenty of other tasks to tackle. For example, a risk analysis identified 116 hazardous situations that could arise with the demonstrator vehicle. “That is why we looked at the necessary safety measures at great length. The biggest issue was that there is no standard to fall back on for this type of application where a robot is mounted on an autonomously moving vehicle. Simply adding a cage around the vehicle was not feasible in this case,” Abel adds. This challenge was resolved by installing a scanner that establishes a safety zone around the iGo neo. If a person or an object enters the zone, the truck and the robot arm are deactivated immediately.

Another development priority was the autonomous truck’s ability to orient itself within its environment. For this, the STILL developers used Monte Carlo localization (MCL), a sample-based method for estimating the position and orientation of a mobile system. The first tests were run in the warehouse of project partner Audi. With the help of learning trips, waypoints were recorded which the autonomous system uses to find its way around. The iGo neo can then freely move between them using fixed objects such as walls and pillars as orientation points. “During the initial tests, the learning trips had to be carried out by us, but the plan, later on, is to enable system users to carry out these trips themselves,” says Abel. The containers on the shelves are detected in several stages by an artificial neural network using a combination of imaging sensors, a 3D camera, and tactile proximity sensors.

Overall, STILL development engineer Bengt Abel is very satisfied with the progress on the project. “We still have some work to do to speed up the truck and the robot, as it is currently too slow to use in the field,” he says in summary. However, this is largely due to safety requirements, which are still rather high. Gerd Hembach from the German Aerospace Center is also pleased with the results so far: “The consortium has developed reliable results within three and a half years and implemented them in an application. I expect to see a prototype of the entire system when the project concludes in June 2020.”