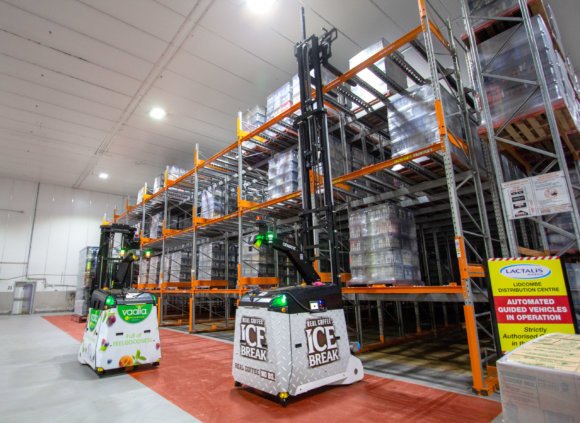 Lactalis Australia (formerly Parmalat) is owned and operated by the Lactalis Group, a third-generation, French family-owned business. Its Australian operations date back to the original Pauls milk business, which has been running since 1932. Locally, Lactalis has 2,500 employees who work closely with up to 500 Australian farmers.

“One of Lactalis’ key goals is to invest in and grow the Australian dairy industry, as well as to promote Australia as a high-quality producer for the Asia Pacific region,” said Kristian Brennan, National Logistics Optimization Manager at Lactalis. “To support this growth, Lactalis is always looking for new ways to improve our operations by boosting efficiencies and productivity. The new AGV solution has successfully helped us to significantly increase productivity at our Lidcombe site, as it allows us to run a faster operation 24 hours a day, seven days a week.”

The AGV solution chosen by Lactalis, Dematic’s Counterbalance Series AGV, manages the transportation of pallets of milk at the Lidcombe site and is capable of lifting loads of up to 1.2 tons to a height of 20 feet (6 meters). The AGVs are well suited to working at the site, which is a chilled environment that has a temperature of 35 to 39 degrees Fahrenheit (2 to 4 degrees Celsius).

Four AGVs work to retrieve pallets from an inbound conveyor system from production, and then feed the pallets into an order buffer, releasing the pallets at a declined angle onto pallet live storage racking. They operate in a small space and manage tight traffic at high speeds of up to 5.5 feet (1.7 meters) per second. 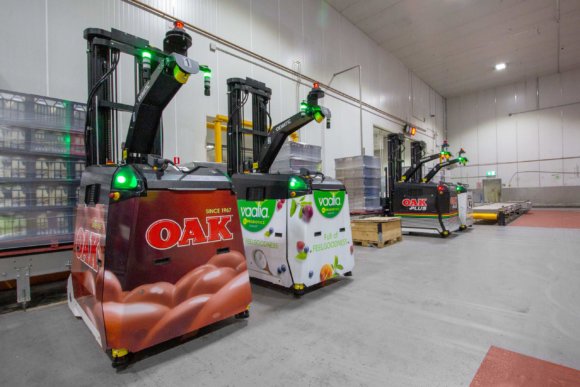 The AGV solution’s accuracy and safety around workers and any obstacles are ensured through sensors and laser scanners that help them navigate with precision. The AGVs are powered by Lithium-Ion batteries and can drive themselves onto charging floor plates at times of inactivity and be fully charged in 2 hours.

“The need to optimize productivity and reduce costs in food & beverage supply chains has never been greater,” said Tony Raggio, General Manager AGVs at Dematic. “We’re excited to see Lactalis Australia has increased its productivity, while also being able to receive a good ROI from its investment in Dematic AGVs.”